Interesting Facts That You Must Know About The Ceiling Fans! 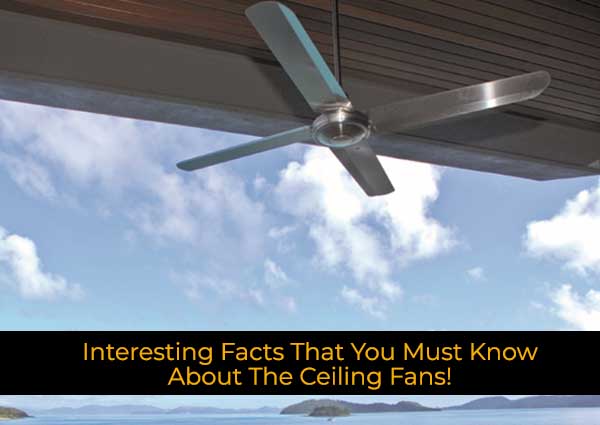 Interesting Facts That You Must Know About The Ceiling Fans!

Jagdamba Service is here to present you with some facts you must know about ceiling fans.

There are some other purposes of ceiling fans apart from providing high speed services. Keep reading the article given below to know more about the ceiling fans.

You will be quite amazed to know that the appliance we use for cooling purposes, in fact really heats our rooms. Why? The main reason behind it is because a generous amount of heat is produced when the electric motors turn the electrical energy into its mechanical state. However, if you use decorative ceiling fans, they will only heat the room, not cool it.

Moreover, even if the motor of a ceiling fan heats the room quite a bit, it actually cools the human body. Mainly the cooling is done in 2 ways. To begin with, it does so by enabling evaporative cooling. In addition, another way is by enabling conventional cooling. No actual cooling takes place, if the air emitting out a of a ceiling fan does not come in contact with the human skin.

How Well The Fan Moves Air is Described By Its Efficiency!

The amount of airflow a ceiling fan produces is actually it’s measure of efficiency. The fans efficiency is determined by the amount of electrical energy. Its units are cubic feet/minute. Thus, the best ceiling fans will emit over 100 cfm/watt, while on the other hand, a poor one could be less than 30cfm/watt.

While shopping for low cost ceiling fans, you may have noticed, that fans with larger blades provide the best cooling services. It is greatly because of its high airflow capacity. As comparatively fans with shorter blades are inefficient.

Often a times, when you check out those fan labels, you’ll notice that when the fan is on low speed, you achieve more cfm/watt. The only conclusion is that you must choose to purchase the biggest fan that gives better clearances as well as run it at the lowest possible speed.

Ceiling Fans Are Expensive When You Have An A.C:

The dynamics change once you already possess an A.C at home. Hence, in order to save money on energy bills, you require to set the thermostat at high temperatures.

Ceiling Fans Can Never Behead You:

A ceiling fan can chop your head is actually a really common myth. However, the blades of the fans aren’t quite sharp enough to behead you. So, for sure you’ll be able to save your head.

You can always rely on Jagdamba Service for the most economical and repair and maintenance services of your ceiling fans. For more information about the same visit the website of Jagdamba Service today.