In the Summer Season, Which Direction Should A Ceiling Fan Spin? 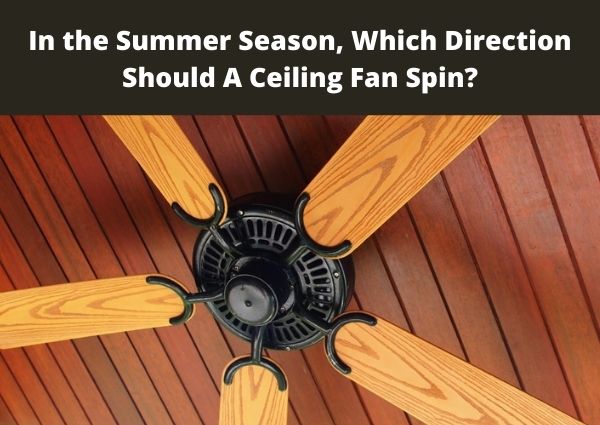 Majority of ceiling fans are designed to cool the area underneath them by spinning in a counter clockwise direction. A ceiling fan circulates air and creates a cool breeze due to the angle and pitch of its blades. Therefore, in summer season, majority of ceiling fans should rotate in a counter clockwise direction. However, there are still some exceptions. Differences in blade design might cause the fan to form a breeze when it spins clockwise, so to know for sure, you may have to test the fan out.

So How do I tell which way my ceiling fan should rotate in Summer?

If your fan is similar to the majority of ceiling fans in the market, then a counter-clockwise spin will cool you down pretty well. It might actually sound obvious, but the best way to determine for sure is to switch your fan on and stand under it. If you’re feeling the cool breeze, it’s spinning in the right direction.  If you don’t feel it in the least, your fan might be in Winter mode. Luckily, fixing putting it into Summer mode is incredibly easy. If you utilize a wall control along with your fan, the reverse switch is perhaps on the side of the motor. If your fan comes with a remote control, search for the reverse button. There you go, isn’t changing the direction of your ceiling fan really simple!

Why does the ceiling fan direction actually make a difference?

When a ceiling fan is put into reverse, or Winter mode, the motion it rotates in, sucks all the cool air from a room up towards the ceiling. This is thanks to the angle & pitch of the fan’s blades. As the air rises to the ceiling it simply pushes the air which is already present there down into the area. This can be an excellent function in winter season, because warm air naturally rises. Warm air will rest underneath the ceiling if left to its own devices, however a reversible ceiling fan circulates the air quite efficiently.

However, when a ceiling fan is in reverse or Winter mode, you’ll not feel a breeze. If you don’t understand the reverse function, you might think that the fan isn’t working properly. So if you can’t feel the effect of your ceiling fan, check to determine if it’s in reverse.