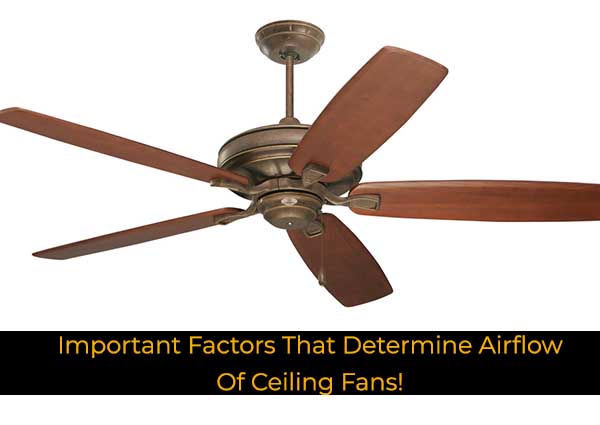 There are multiple factors to consider, while shopping for the most economical ceiling fans. Jagdamba Service brings an insight into the important factors determining airflow of ceiling fans.

Often a times, people overlook the airflow as well as efficiency of high speed ceiling fans, however the amount of air your fan produces directly impacts the level of its performance. In order to determine the efficiency and air flow of the ceiling fans, there are about 5 major factors that work together:

Blade pitch is referred to the the angle of the fan blades as they provide cooling by moving. They are quite similar to a rowboats oars. A rowboats, flat blades make fewer efforts to actually move. However, in ceiling fans with a high speed, blades with flat pitch do not need large motors to produce high speed. The pitch needs to be around 10-12 degrees.

In addition, a steeper blade pitch ranging between 14-15 degrees will require a much stronger motor in order to achieve the same speed. On the other hand, the fan with a flat pitch will move less air as well as may produce noise even at a high speed. Hence, you need to understand that the the power of the fan motor is highly determined by blade.

Shape And Size Of The Blade:

Another important factor to consider in most economical fans are the shape and size of the blades. The size of the blades must not be too long or wide. Fans that have bigger blades never ensure that there will be better airflow even if the fan has a large motor. Relatively fan blades that are small and narrow may be able to move much air.

RPM is referred to as the speed of the blades and how fast it exactly spins. The right pitch needs to be maintained as the faster the blades tend to spin, the more air they will produce. You need to find 6 different speed settings fans, while purchasing the best ceiling fan .

Height From The Ceiling:

The height of the ceiling fans must not be more than about 10 to 12 inches away from the ceiling. Unless your fan is a huge ceiling fan that requires placement right near the ceiling if it is too far or too close to the ceiling, it won’t be able to produce much air. Having vaulted ceilings, your fan needs to be about 8 to 9 feet from the floor.

Nowadays, there has been an increasing demand for decorative ceiling fans. Majority of people want to cool themselves by decorating their houses. However, the motor of a fan is the most essential factor to consider. It depicts the performance, power, and longevity of the fan. You can easily count on the motors to provide excellent fan airflow.

You can always rely on Jagdamba Service for the most economical and repair and maintenance services of your ceiling fans.  For more information about the same visit the website of Jagdamba Service today.