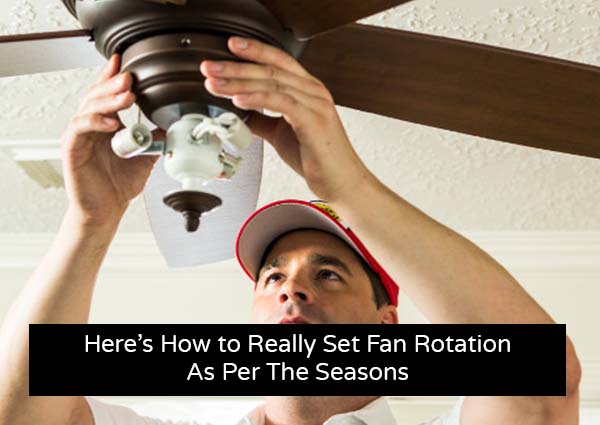 Not many individuals know but the ceiling fan rotation should ideally vary for various seasons. Why? Because it helps to actually maintain the room temperature better.

So, to begin with, some ceiling fans can work in two directions: clockwise and anti-clockwise. Moreover, the direction of the rotation is such that it respectively blows air upwards as well as downwards. While normally, all the fans are set to blow air downwards, their rotation being anti-clockwise, there are some fan that provide the reverse rotation, feature too.

So, which rotation is best for which season? Read on to know.

During summers, we really need our fans to keep us cool, don’t we? So, during summers, it’s best to actually have the fans spin anti-clockwise. This direction of rotation, directly blowing air across the room as a result of the downward draft of ait due to the rotation. Due to the fast circulation of air within the room, a breeze effect is created and therefore we feel cooler.

The winters are really cold that anyone rarely use fans during winter in majority of Indian regions. However, there are still some rare days once you feel cold and need air circulation but not cooling. So, when those rare days come, ensure your fan is spinning in a clockwise direction. The rotation of the fan in clockwise direction, blows the air trapped near the ceiling downwards. Why is the trapped air important? Because warm air is lighter than cool air. So during winters, the nice and cozy air inside the room keeps on saturating near the ceiling, while the air below makes us feel cold. Use your fan in a clockwise rotation in order to keep your room warm. Additionally, you’ll be able to also turn off the heater and save on your electricity bill.

How To Check The Fan Rotation Direction?

For more information visit our website, search for JAGDAMBA SERVICE on the internet and we’ll pop up.