DC vs AC – Which Ceiling Fan Is Best 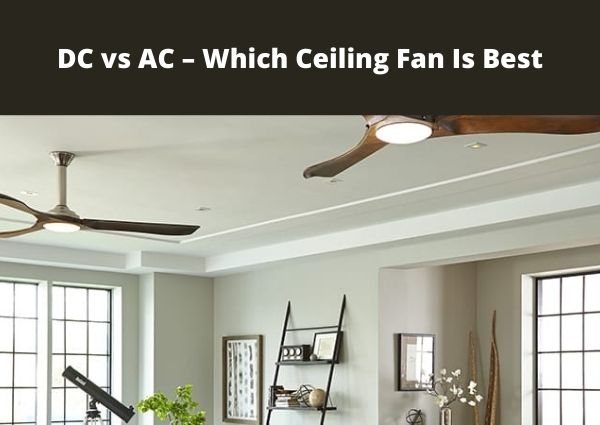 DC ceilings fans have being increasingly introduced to the market. Generally, DC ceiling fans usually use less energy as compared to other ceiling fans. However, majority of people are asking what exactly DC fans actually are? What kind of advantages do DC motor ceiling fans have? and Whether DC ceiling fans will really help them save energy, and thus, save money or not.

There are 2 kinds of electric motors, which are:

Alternating Current (AC), which is electrical current which reverses direction and

Direct Current (DC), which, as its name suggests, electrical current which only flows in one direction.

Majority of ceiling fans & household appliances, use AC motors, because AC is the kind of current which is usually distributed by power companies.

AC motors generally function by directly being connected to a power source. This power source is exactly what creates the moment of force needed to rotate the motor’s rotor. In case of DC fans, the direct (i.e. AC) power source usually connects to a transformer which then in turn converts that power to DC. The effect is that it decreases the quantity of power utilized by only using a DC rather than the AC. The DC motor uses a system of magnets of opposing polarity in order to create the force required to rotate the motor’s rotor.

Please take a note that the current models of DC motor ceiling fans can’t be connected directly to a DC power source (such as batteries or solar panels). Eventually this may change in the future, manufacturers don’t seem to currently have any plans to provide this facility.

In majority of cases, they use less energy, which is merely up to 70% less than a standard AC fan.

They are generally extremely quiet.

Quite often, they’ll have more speed choices, the reverse function on the remote, and are typically much more faster to begin, stop and change speed.

The motor is usually more compact and lighter, which allows for a slimmer motor design.

DC ceiling fans tend to be costlier in comparison to an equivalent AC model. Although you do use less electricity and thus save cash there, it’s minimal.

Moreover, AC fans can even be controlled from a pull cord, remote, or wall control, while on the other DC fans can generally only be controlled by remote. Remotes are much more likely to be broken, lost or run out of batteries. In addition, at an extra charge some DC fans are also available with an optional wall controller.

Furthermore, AC fans are still extremely energy efficient, on high speed a regular model will use no more than  100 watts.

WHAT IS RIGHT FOR ME?

As with anything, there are many factors which will determine your decision. Finally, what’s most vital is that you can always get excellent quality ceiling fans no matter if they have AC or DC motors. Fans which are extremely quiet, don’t wobble and further create good air movement. Even though AC motors may use more energy as compared to DC motors, they nevertheless use very little energy. This is similar to one or two standard halogen light bulbs on high speed. Compared to most household appliances, especially air conditioners, this is actually nothing! So once you’ve got worked out your style, budget as well as function needs, feel confident in going either AC or DC.