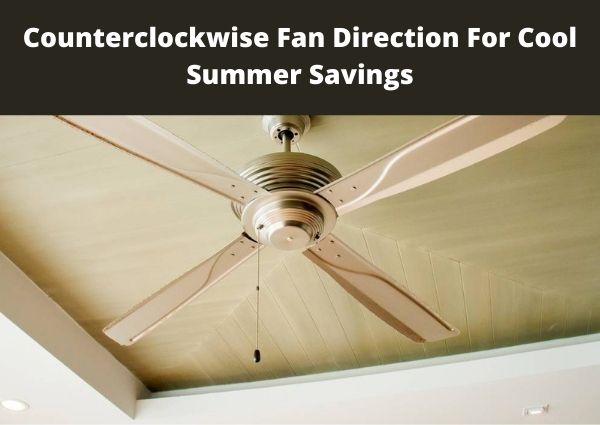 Ceiling fans are the must-have appliance for summer, but did you know that ceiling fans have a particular setting for summer? Changing the direction of your ceiling fan in the summer and winter not only causes you to feel comfy, but it also allows you to adjust the thermostat and provides your AC unit a much-needed break (your wallet also will get some much-needed rest, trust us).

In the summer season, ceiling fans should rotate counterclockwise direction in order to push cool air down to the floor. The cool air evaporates perspiration & then creates a wind chill effect, which further without affecting the room temperature causes you to feel cooler. This further enables you to set the thermostat at a higher temperature without forfeiting comfort.

This is one of the best direction of rotation for a ceiling fan, since it makes the air feel cooler than it really is. It allows you to turn your thermostat up some degrees.

So, how you’ll you tell if your ceiling fan direction is set for summer?

Usually, the counterclockwise direction of the rotation is set by pushing the direction switch on the side of the motor housing down. Check your fan’s instruction manual to verify. If you’re unsure if your fan is turning the proper direction, then turn on the fan, stand directly under the fan blades and lookup to observe the blades rotate. The blades should move from the top left, then all the way down to the right, and then back to the top, which is counterclockwise.

Then you should feel air movement while you stand under the fan. If the fan is moving and you’re feeling a rush of air, it’s within the correct setting for summer. However, if you don’t feel much air movement, it’s possible that the fan is spinning within the wrong direction.

You should turn off the fan and then wait for it to stop fully, then you need to switch the fan rotation by flipping the direction switch. If there’s still no air movement after you turn the fan back on, or it’s very weak, your fan may have a failing motor or the pitch of the ceiling fan blades may be too flat. Consider upgrading to a more modern & newer ceiling fan.

You need to keep in mind, while a good ceiling fan set to the proper direction of rotation can take the edge off of a awfully hot day in summer, it doesn’t actually cool the air within the room. The ceiling fan improves air circulation and creates a breeze that you just feel on your skin, a “wind chill” effect. In addition, to maximize the effect, the fan should be turned on to its highest speed.

Cooling comfort is just a small advantage of using a ceiling fan within the summer. Homeowners who use ceiling fans during the summer can save as much as 40% on air conditioning bills.